BOOK SMART SHAWTY: More than stoke to see out parent brand, ClawsIDesign apart of the June 2016 summer issue of Nails Magazine [ huggge fan!!]  Bringing something new and fresh to the nails market, ClawsIDesign inventions the first selling nail-art sketchbooks for beginners and professional nail artist internationally. The style that is featured in Nails Magazine is “Dot Dot”, a coral pink color which is the first pattern designed by ClawsIDesign in winter 2015.  Much love to the Nails Magazine team for the love and to Yire Castillo for the dope claws on the cover! 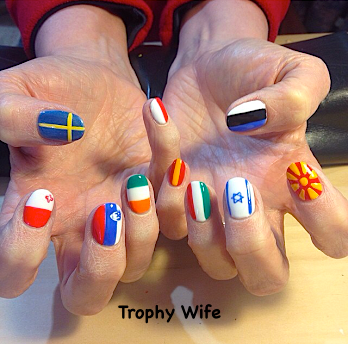 Happy Friday Everyone!!! It is only been a little over 8 months of launching and the, Cunnt Claws movement is being embraced consistently by some mind-blowing countries around the globe!! Just want to give a special shout-out to the following countries (as see in the nail-art created by Melbourne based artist, Chelsea of Trophy Wife Nail Art) : Sweden, Malta, Slovenia, Ireland, Poland, Spain, Hungary, Isreal, Macedonia and Estonia for stopping by and showing your love! (Other nations not mention, this message is directed to you also). It is only the beginning and your devotion is highly appreciated!!! xxNikiba