Pleasure sauce: The… slimy… residues of … satisfaction! [Soulless scream]! The time is near, for the inner “mystery-self” in you to surface! Viewing a different side of the SincerlyKimBui world, nail artist Kim Bui re-creates the idea of art in this segment of Cunnt Claws . Using inspirations from one of her favorite artist, Stunt Kid who currently lives in Norfolk VA. Stunt Kids’ illustration reveals women who appear to be in demonic form of spirits.

The unidentified slim dripping down the lips is striking! Still open to know the untold story behind Stunt Kid’s concept! The 3-d “marble” nail art concept is a mind twist for one’s photographic memory bank! : 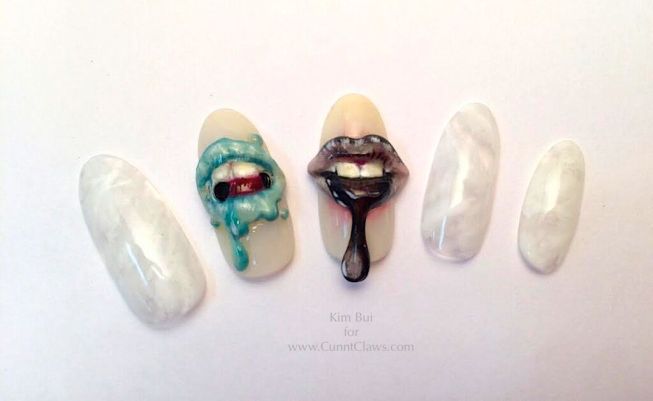 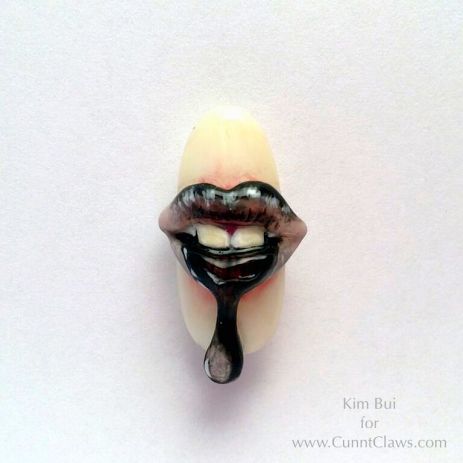 Marble is a streak of spotted patterns. Mostly used for sculpting of some kind. Kim uses subtle color for her marble concept. Molding are used to create sensual “lips”.

[Fucking Stop, Cuz we can’t breath!] We live in a world where there are countless number of global problems such as: global financial crisis, poverty, natural resources and racism. There is an outweighs numbers between the amount of people willing to devote time to help change global issues and the issues that we all as a nation is dealing with at hand. Undeniably, ALL LIVES MATTER, but today we are taking it one step at a time to focus and bring awareness to human rights and the reoccurrence of police brutality against black lives in the U.S.

Are you familiar: Amado Diallo [Shot 41 times,1999], Eric Garner [2014] , Michael Brown [2014] and Freddi Gray [2015]? Hello and welcome to the theme of BLACK LIVES MATTER! Re-informing you, these unarmed men have all been victims of police cruelty and they all died because of it. Between, 2000-2015 over 80 unarmed black lives has been wrongfully killed by police [ both men & women]! Many of these victim’s stories never made headline in mainstream media.

Very often, where we are from and the culture that we live in sets the tone that manifest our behavior patterns and ways of thinking. Grateful for the positive outcomes but what about the toxic patterns that contributes to the list of worldly difficulties that we all face now! We can all agree: armed police has way more authority than their unarmed captives. There is no justification for inhumane actions that we seen through out the media of police beatings and shooting causing death. It begs the questions: when police are trained for their position, are their correlations between the use of deadly force and race? What are the police forces taught internally to make them feel subconsciously comfortable abusing their authority in inhumane ways? To be straightforward, there are more deeply rooted questions then there are reasonable actions justifying the epidemic of police brutality and the black lives that are no longer here with us! But at some point there is a code of ethics that is being broken and its not sitting well with both domestic and international folks who understand the value of life…especially mothers who can not fathom loosing their child to someone hired to protect and work in partnership with their assign community.

Below, freelance nail artist within the nail community unite with me on this project, to display their voice and concern in a peaceful manner while raising awareness on the first ever nail-art project curate around the movement: BLACK LIVES MATTER and racial discrimination! We hope to visually educate the people around the globe: 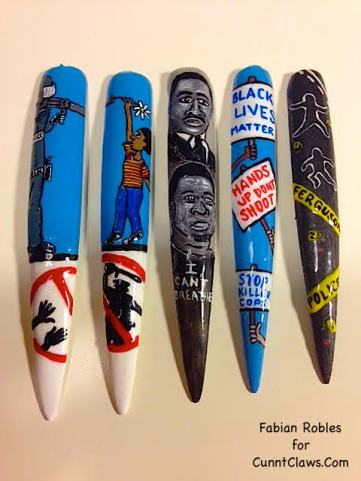 [Above] “It saddens me to see police brutality over the news. I can only imagine and pray for those families’ that have lost loved ones because of the police. I remember a famous quote from, Dr. Martin Luther King, Jr back when I was young. I didn’t understand what it meant but it all makes sense now: Law and order exist for the purpose of establishing justice and when they fail in this purpose they become the dangerously structured dams that block the flow of social progress” – Fabian 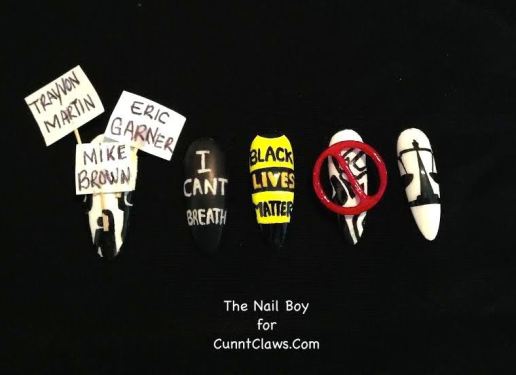 [Above] “Black lives matter, why? Because no life, gender, sexuality or COLOR is more important or should be more accepted than another. We are all made from skin, blood and bones. We were all given a life that is EQUAL. Why don’t we treat it that way? Why do our people have to still suffer, at this day in time?” – E. Elejandro 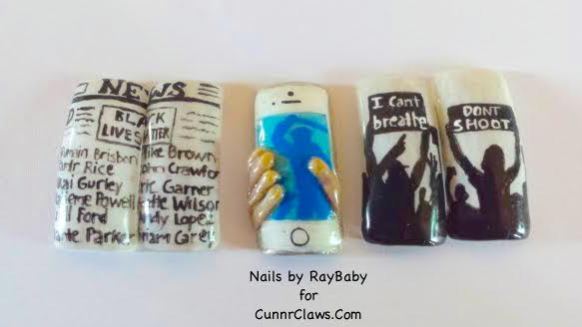 [Above] “It saddens me that we still have to deal with such racism in this day and age. But with the power of technology we can document these incidents that usually go unseen”- Ray 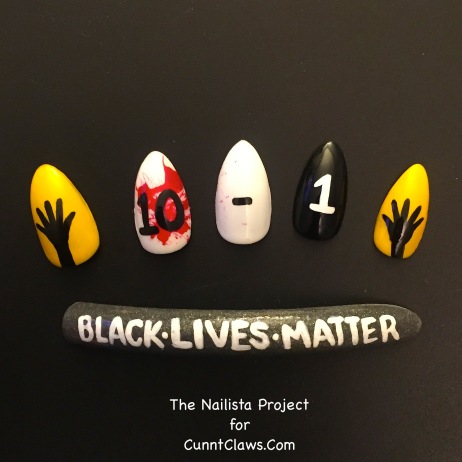 [Above] “According to media studies, to every unarmed white man killed by police brutality, 10 unarmed black men are killed in Baltimore. Studies also show that EVERY 28 hours a black man is killed due to police brutality across the country.  All over the internet there are videos of black men and even some black women who are beaten severely by police officers, who were never held accountable for such actions. They have spilled the blood of so many innocent people.  Why must black or brown skin be seen as targets?  How many lives have to be lost before police brutality is considered a crime?”- Marcia 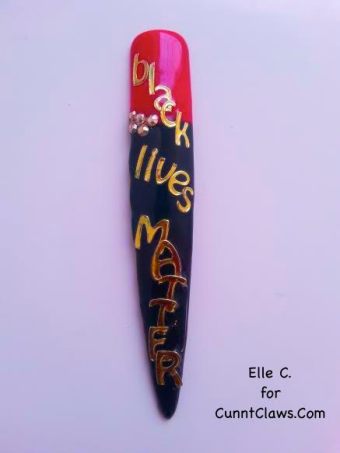 [Above] “My people are called savages, thugs and hoodlums for rioting…Boston Tea Party, anyone? We get dismissed if we raise our voices just a little out of sheer passion or certain and then we become the “angry black guy or girl”. My PEOPLE are being taken advantage of. Blacks are all over national news, destroying their hometown but on social media there were photos of Caucasians looting in the same area.That didn’t make it to CNN. Be real, be fair. There is a system built to take our boys and men and put them in prison to rot, or be shot by corrupt officers and left to rot in the sun for hours as stories are fabricated and rap sheets are quickly sent to the media and the killings are justified. WE ARE NOT BEING VALUED IN THE COUNTRY THAT OUR ANCESTORS HELPED BUILD, BY FORCE” – Elle C 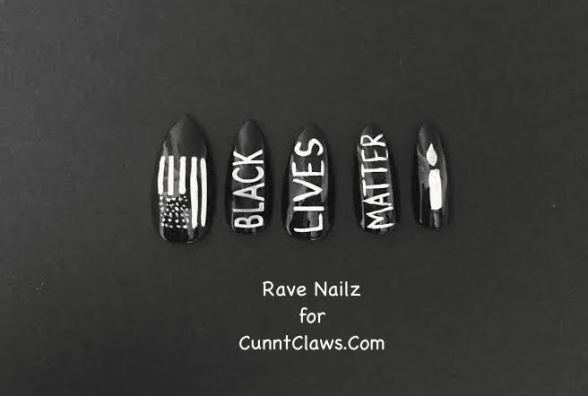 [Above] “The first step is acknowledging that we have a systematic problem! White privilege exists. We have victims in our country, and now is the time to lift those people up” – Briaelinn 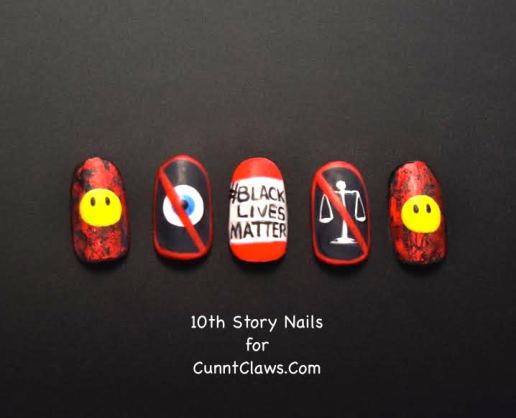 [Above] “It’s frustrating living in a world, where silence and consent in the face of terrible acts are valued over justice. I feel powerless to do anything other than raise awareness.  Black lives matter because all life should be valued.  Respect for life itself should be the most important act anyone can choose”- Danielle 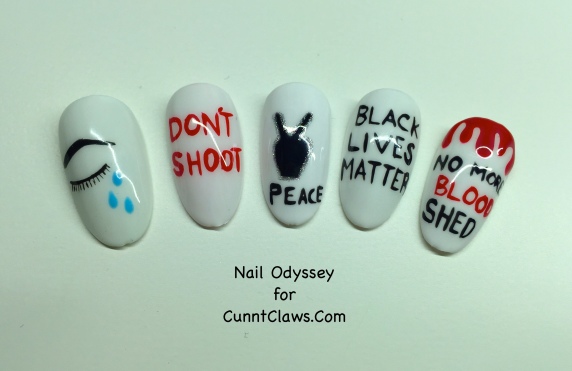 [Above] “More attention should be focused on police brutality. It’s not right for citizens to be afraid of something that should protect us” – Elsy 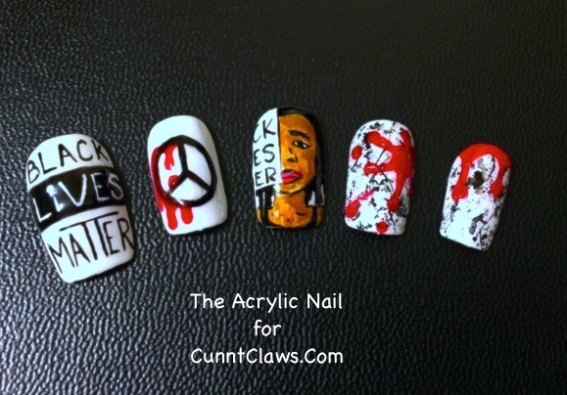 [Above] “Racism is alive & well, dwelling in the ignorant minds of those with the power to oppress”- Beatrice 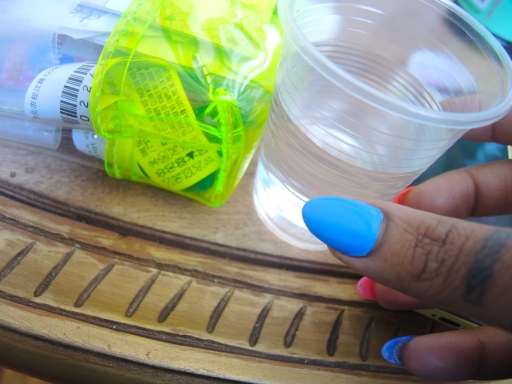 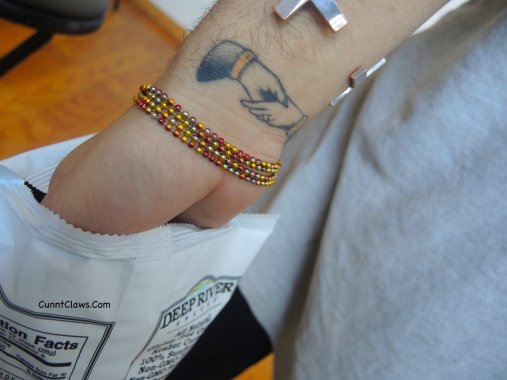 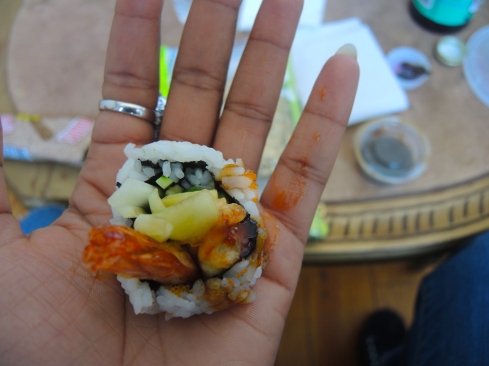 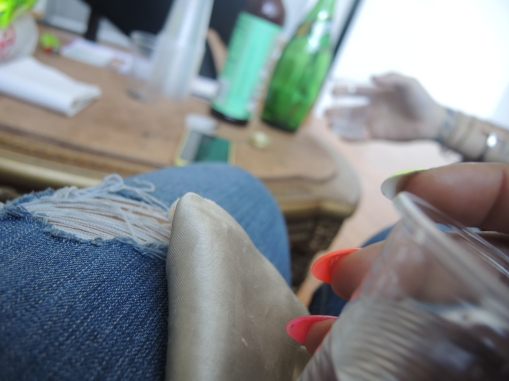 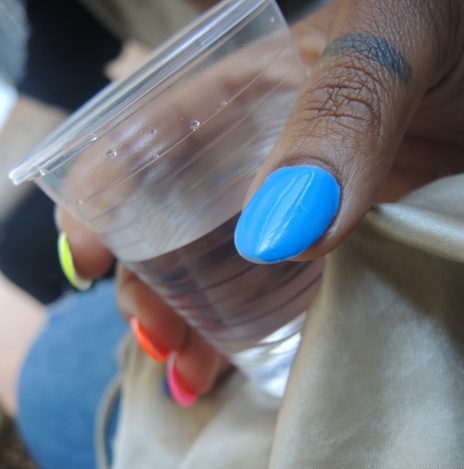 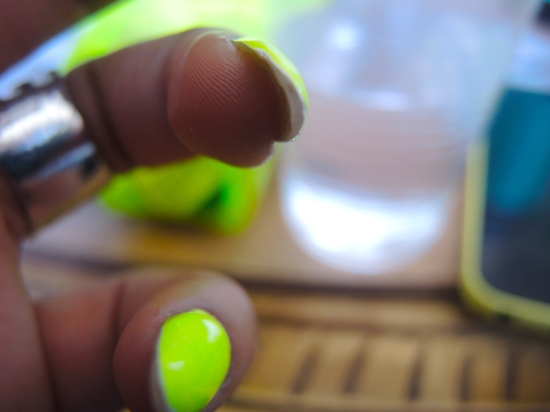 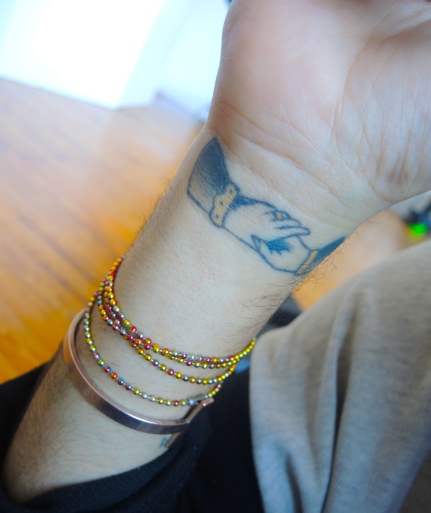 [Neon Mystic!!] Vietnamese origin, Kim Bui contributes her time and skills to her career of being a full time nail technician and a press-on nail distributor. Fancy up on a good purchase of art design brushes with blending elements like 3d nail art supplies and whatnot can take a 360 spin into an endless trail of legacy! END_OF_DOCUMENT_TOKEN_TO_BE_REPLACED 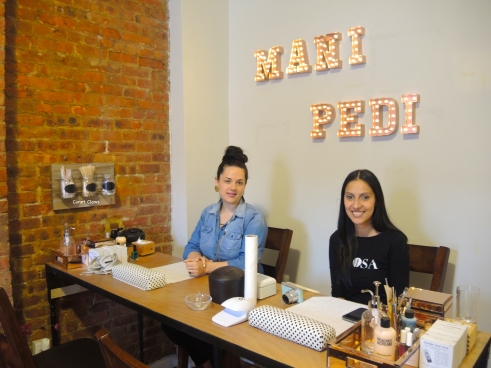 “Finite to fail, but infinite to venture”- Emily Dickinson END_OF_DOCUMENT_TOKEN_TO_BE_REPLACED 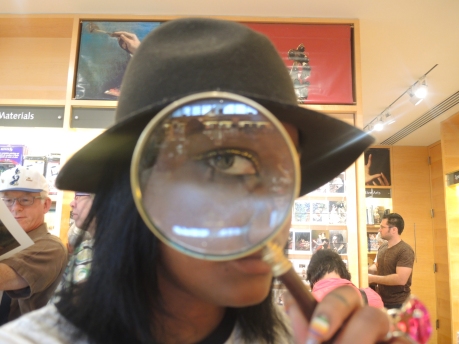 For winter break,I spent some time on the west coast catching up with all the things I missed out on the last time I went. Referred by a number of people who lived in Los Angeles, I visited The Getty art museum for the first time and was blown away! END_OF_DOCUMENT_TOKEN_TO_BE_REPLACED